Why should we take our time to actually appreciate Shancai


Ever since I got into the meteor garden fandom, it's no secret that a huge part of my social media is portioned with excessive amounts of meteor garden memes, ig and twitter posts. Especially my tumblr which is just another uncontained, inexpressible excuse for an another way to fangirl over meteor garden ( See, I can admit things).Anyway, while following all these amazing accounts have definitely kept me amazed, intrigued and exclusively stuck to the fandom like a leech, it also made me come across waves of the general opinion that I may or may not agree with but would  definitely love to debate. And one of those opinions is that Shancai is selectively a total incomprehensible species of prude. On a collective basis. The general opinion is that Shancai is always undeniably slow and prudish. And how could she be ??? When demigod that belongs up in the high heavens grovels at her feet? Or its the usual how does she deserve Doaming Si when he's this good argument. An argument that is reflected all through the series as whispers behind her back. An argument that always reminds her of how lucky she is and how grateful she should be.An argument that always disregards her sexuality, her sacrifices and her reasons for processing this relationship and her upbringing which to me always seemed unfair to me. So I decided I should write about it and explain why it seems unfair to me. However, this is just me explaining my stance and I'm no way pushing my views on anyone so if any of you feel this is biased or unsettling or would like to contradict it in general, feel free to let me know😊.So let's start seeing things from Shancai's perspective.


A decent, normal girl brought up in a mediocre background, with mediocre parents and a moderately decent childhood. Though bought up in a metropolitan city like Shanghai, she had a normal, less glamorous life. She was usually unproblematic but was outspoken and upfront, and kind to her peers. A striking quality that earned her respect and admiration from all. She was also very hardworking and determined, always getting what she wants through effort and patience. So when she arrived at Mingde, she probably felt overwhelmed at the grandeur and elegance. And the people around her usually singled her out, so she stuck with the group of friends from school. And to add insult to alienation, she tackled Bobbit and had her phone crushed on the first day. So from an outsider, she became an outcast. After this, she became a ridicule. So processing all this humiliation in her own brash, impulsive manner and dealing with stuff like the joker card, infatuation, and the attention surrounding her, she wasn't really ready to confront or admit to anything. She was very much new to it. Enter Daoming Si, with his adamant and reclusive ways of putting all sorts of pressure on her. From playing a game of bridge to full-on out love confession, he was always behind her heels, seeking it out. With all this pressure around her, it was clear that she felt confused and lonely. And her only confidante is Xiaoyou, who is as clueless about love as she is. Though she does give Shancai sound advice sometimes, she is naive and too easily swayed by. The only other female characters in this show who are mature and experienced enough to give  Shancai proper advice are her mother and Zhuang(Not Xaozi, no). Both of whom possess either antiquated or excessively liberal attitudes towards sex and sexuality. Both of whom berate her beauty. And Shancai, clueless as she obtains advice from all of these contradicting sources. And thus, remains as clueless as ever. In fact, all this advice makes her clueless and confused and thus she ends up distancing herself from him forever.


While she still isn't clear of her feelings for Lei. Enter Daoming Si, again taking her to expensive vacations, buying her stuff and constricting her privacy. As a person who easily doesn't open up to people, I can confirm that someone running behind my heels daring me to acknowledge him or confirm my feelings for him will freak me out. In a hair sits straight up in my skin and fear grips my midnight thoughts basis. Like me, she did what she can do best: Flee. Fleeing is her safety net. Her processing mechanism. And she can do anything but acknowledge or verbalize her feelings or her thoughts. Especially in a public or a private scenario. Sprinkle some good old body bashing comments and snide poor social position remarks and you have the perfect recipe for serious low self-esteem with a side entre of crippling anxiety. And boy did it work wonders on Shancai. So here we have our lead, with obvious self-esteem issues and possibly anxiety issues. And what is she put into? A public game of bridge and a national cooking competition. While it is clear that this forced Shancai to overcome her issues, what irks me is the fact that how little her feelings were given consideration not only then, but during the course of the drama. It was always Daoming Si loves you, so love him back. It was never Daoming Si loves you, so decide whether you love him or not. Or it was always usually why do you deserve his attention? While it's clear that all this pressure eventually forced her to confront her feelings in many instances, I genuinely believe it would have been even sweeter if Shancai came to a realization on her own.


Just imagine, Shancai running after a bus instead, baking a cake or throwing a party for Daoming Si. But no, everything has to be done quickly. And it moves forward quickly than expected, which often results in sudden outbursts or half-hearted confessions or poorly worded replies. We do get some good responses in the end but they are very limited. This brings me to my main point, Shancai's character arc is left out blank and is undervalued than most characters on this show. Before yall come for my head, give me a chance to explain my point. Let's begin, when the show began we saw Shancai as a hardworking teenager who strives to carve her little place in the world with lots of effort and determination. And what is she when the show ends? Daoming Si's wife. She really has won the lottery now, hasn't she? In episode nineteen, when playing the piano she recites how humans are more valuable than gold or materialistic things, and now that she is a Daoming herself, we never get to see her transformation fully. Does she still hold that view? Or does she understand why wealth is so important now? Has she learned to love and prioritize herself? Is she confident? No, other than the fact that she is married to her love and has possibly relocated to London, we don't get many answers. It seems as if her character arc has done a backflip. From sounding confident and sound, she becomes somewhat meek and insecure as the show progresses. It's obvious she is intimidated by Daoming Si's world, but it seems as though the story takes it for granted. We never see her overcome it. Just like her fears and intimidation before, it seems as though, her feelings are given little consideration towards the end as well. And there are very few efforts made to understand her viewpoint.


For example, we always hate how much of a prude she is, but it's not so hard to understand why (look at her mother talk, for christ's sake). And what is the usual viewer response to this? That she is a sloth or uncanny and slow. That she should move faster and get her man quick.That she is average beyond comprehension. Or as the F4 and her friends around her say, She is dumb. All of which are misjudged opinions. The only people who seem to understand Shancai and get through to her are Lei and Mrs.Yu. And let's review the no of times we see them together, we do see Shancai and Lei a lot of times, but in most cases, their discussions are usually about what's between them. The little rare times where get a glimpse of their relationship with Shancai are, however, pure gold. And even her scenes with Mrs.Yu are limited. In fact, ever since their relationship began, the majority of scenes that she is alone, show her confused and depressed and questioning her relationship and morals. For a girl brought up in a conservative family where she is taught to prioritize virtue, she is bound to question a lot of aspects in a modern relationship. And to make matters worse, Xiaozi entangles herself into their relationship and makes matters more confusing than before, for both of them. And if that's not worse, it seems as though all the female characters go through major transformations in the show, which again pushes her own transformation out of the picture. Whether it's Daoming Feng, Xiaoyou( Who gets a friggin haircut) Xiaozi or LiZhen, we get to witness their growth. And what do we witness Shancai grow into ?. Despite her surnames, we are shown very little of her transformation or adaptation. We almost always see her question but are never shown if she reached the answers. I mean, I love her sturdy, no shits given personality, but we are rarely shown how it stands through marriage. We get the hint she has changed but is rarely shown how. All in all and Therefore, I rest my case that Shancai's Character arc is reduced to be basic and deserves more screen time than it gets. And Hats off Shen Yue for breathing her into life while still sticking to the script.


And if we ever do get a season two, I sincerely hope we see her transformation more on-screen than other characters. She is the lead after all. So next time we see her being "slow" or "dumb", understand that it is how she processes things. Well, as much as the show allows her to and after all, it's only fair to let a human being or a character come to a realization on their own before jumping to quick conclusions. Besides, I actually liked the fact that she took her time with certain things, asked questions and thought before jumping into the love bandwagon. It made her more human and relatable, whether you like it or not and it established a strong ground for their relationship. No one falls in love in a matter of seconds, no matter how dashing the person is. So here it is, my thoughts on Shancai as a character that doesn't deserve harsh judgments. What she does deserve though is more screen time. Like lots of it. Like she is a queen and we totally deserve to see her growth as the Daoming Empress, and yes I'll admit I'll rather see her shine than some lesser female characters on the show (there I said it). So the next time I see a random post on social media hating on Shancai for no proper reason, I promise I will not shy away from tagging you with this blog post 😤. 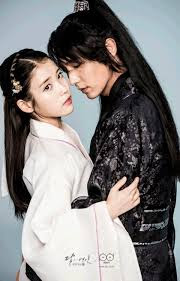 Why Scarlet Heart Ryeo is a frustrating,brilliant,complex and wonderful tragedy you will never get over in your lifetime ( probably)